Platinum Creatine - A Must For Your Muscle Growth

When you hear the word “creatine,” the first thing that comes to your mind will be “muscle.” That's true. Creatine synthesis, especially platinum creatine intake, should be a priority for muscle growth.

The Brand Of Platinum Creatine

Platinum Creatine, or Platinum 100% Creatine, is a workout supplement from MuscleTech. MuscleTech is the best-selling bodybuilding supplement brand based on the number of products they’ve sold since 2001. It sells anything that helps you get a balanced workout life, from protein powders, pre-workouts, fat burners to protein shake bottles and exercise programs. Among all of its products, Platinum Creatine is loved the most. But we're not here to judge a book by its cover. Let’s find out more about Platinum Creatine. According to studies, creatine is one of the most researched supplement ingredients in the world. It is a compound that energizes your muscles. Being a natural substance in the body, creatine is made up of 3 amino acids, arginine, glycine, and methionine, which provide energy and increase endurance during your training. Creatine is produced in your liver, pancreas, kidneys and is transported to your body's muscles through the blood vessels. Once it reaches the muscles, it is converted to the high-energy metabolite PhosphoCreatine, known as Creatine Phosphate (CP).

Why Do We Need Creatine?

We are powered up by a substance called Adenosine Triphosphate, or ATP - an organic compound found in muscles that breaks down through catalysis, creating energy for muscle elasticity. However, the usual supply of ATP is only enough to provide for about 10 seconds. To keep and gain more ATP, you will need quite a lot of things - including Creatine. Creatine will replenish the stool from ADP phosphate and give rise to additional ATP.

ATP is considered the cell's energy currency. If you have some Creatine, it will be converted into a phosphocreatine molecule, which acts as a storehouse for ATP generation. The more ATP that is stored, the more energy you can produce, which increases the ability and effectiveness of muscles.

Research also showed that creatine enhances exercise intensity and recovery. It can pass through the stomach and into whole blood. While entering muscle cells, it is converted to Creatine Phosphate.

Moreover, creatine can be such great support for your workout, too. Plenty of studies have examined the effects of creatine supplementation on training performance. One study found that using 5 grams of creatine per day increased 1RM bench press after 28 days. Thanks to 22 untrained young men as clinical study subjects, the researchers concluded a positive result. Also, several researchers reported that creatine could enhance vertical jump levels in athletes. The average sprint swimming time of a sportsperson may improve because of taking creatine, as well.

When they say Platinum 100% Creatine is 100% Creatine, they don't lie. Platinum 100% Creatine turned out to be a single-ingredient creatine powder. As a well-known compound for every gym-goer, Creatine Monohydrate in the product is extracted 100% and canned to give you 80 servings, respectively. Its main effect is to closely link muscle building and development activities by accelerating protein biosynthesis.

The resonance activity between one side promotes the muscle-building process; the other is to provide the raw energy that forms the entire system’s operation inside the body. Not only the motor system, including muscles and bones, the activity of the nervous system is  also "lubricated" and regulated to function smoothly. It can be said that the benefits of Platinum 100% Creatine on the body are total force, not localized or encapsulated within a particular area, organ, or system.

MuscleTech describes Creatine Monohydrate as “a major form of fuel storage that controls muscle contractions when you lift heavyweights.” When you run out of your creatine stores, you'll be worn out, your muscles weaken, and you'll give up before your workout finishes. Creatine Monohydrate has been cited for its "creatine supplemental" features, as Platinum 100% Creatine directly affects the amount of creatine you are producing and storing when ingested. You will train longer and have better lifting experience. 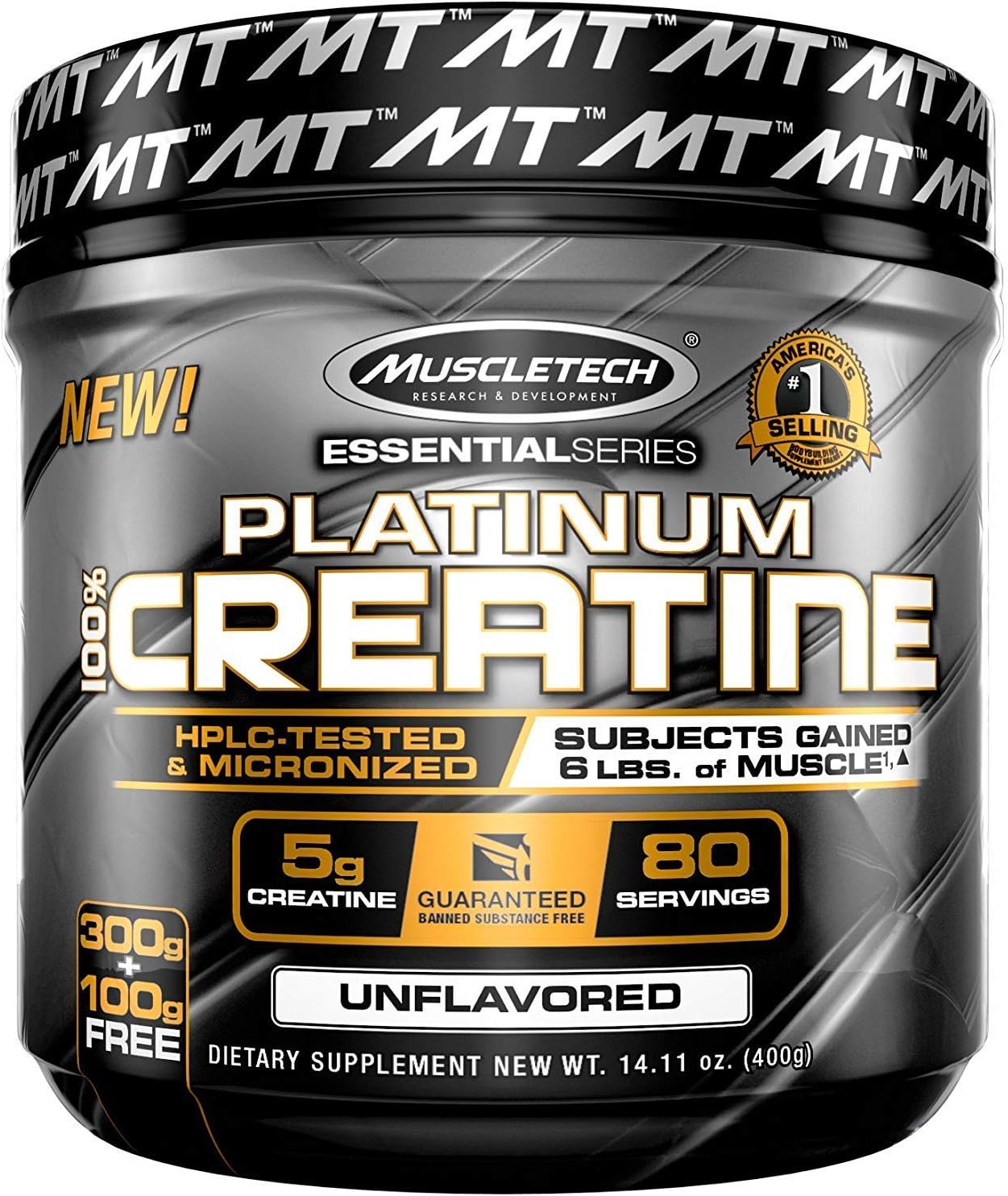 This kind of creatine has a very positive effect on those taking it. The compound helps stabilize the energy released inside the body and get it where the cells need to use it. In parallel, the central nervous system is also stimulated to produce the necessary hormones. The cardiovascular system is accompanied by a complex "matrix" of circulating blood vessels. Its flow is regularly "maintained and cleaned" properly, helping the body to focus mentally without causing tension, nervousness, or overactive.

Creatine monohydrate, in particular, is also known for causing stomach problems. This is why users typically don't take large amounts of creatine per serving. They just refill an appropriate dose of creatine. The frequency depends on your personal goals. To achieve the best result, you should ask your doctor for advice before taking any supplements available.

How To Take Platinum 100% Creatine

MuscleTech recommends that you take Platinum 100% Creatine in two phases:

- Loading phase: For the loading stage, mix one scoop with 8 oz of water and consume four times per day. After three days, proceed to the maintenance phase.

- Maintenance phase: Mix 1 scoop with 8 oz of water once or twice a day.

If you want more impressive results, replace water with a carbohydrate drink or a sports drink. Simply pour water into the shaker first, then add a scoop of this creatine powder and shake the bottle until fully dissolved. MuscleTech also suggests that creatine works great when taken before or after a workout. On non-workout days, it can be consumed in the morning.

All in all, creatine is worth trying and widely-known to work if gym-goers follow the instructions carefully. MuscleTech may not be the most affordable creatine brand out there as the price of this MuscleTech can somehow be high, but this company has done what it takes to give its users what they pay for. Other than pricing, there are so many obvious proven advantages, so why don’t you give it a chance, just for a while, and see how your body upgrades to a whole new level?

Where To Buy Platinum Creatine In Singapore?

Now you understand why gym lovers must have Platinum Creatine in their gym bags. Actually, finding a place to buy an authentic and high-quality Platinum Creatine is even more important. Due to counterfeiting’s complicated phenomenon, you are likely to buy fake products at high prices if you're not careful.

So, in case you wonder where to buy the excellent MuscleTech Platinum 100% Creatine in Singapore, why don't you drop by Ultimate Sup? Owning business licenses and always operating professionally, Ultimate Sup has become the place for every gym-addict to purchase the product without a doubt.